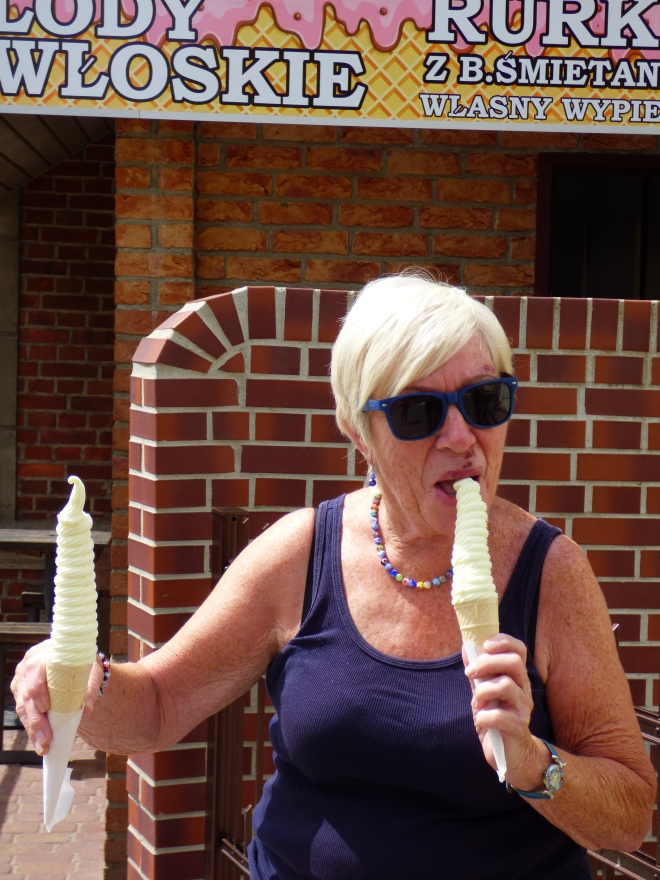 We were up very early this morning, we wanted to catch the tram into Wroclaw, in time, to join the 10 am walking group for a tour around the city. Once I had managed to buy some tram tickets from the machine we got on the tram and had to get off after 10 stops. We managed to find the particular statue in the main square and we were in time. While we waited we noticed a sign on a shop advertising dwarf maps and just behind the statue were three brass dwarfs.

Lucas, our guide for the morning, started by giving a brief history of Wroclaw. After, he explained about the dwarfs. Around Wroclaw, there are around 500. In communist times it was illegal to collect in groups of more than three people. So, the students started collecting together as a protest. The people thought that was a good thing, so they started to do the same. Where the first public meeting was held and subsequent meetings, small model, dwarfs were erected. Now the big companies have jumped on the band wagon and they erect them depicting what the company does. As he spoke, a school group of little children came past all dressed as little red, dwarfs.

They looked so cute.

One of the things he did say which will come as a surprise. The economy in Wroclaw, for instance, is booming and the unemployment rate is as low as 2%. We all know of the Poles that flocked to Britain. It is little wonder that they are returning to their, now very prosperous, home country. He also told us that the people here are very religious and are mainly catholic. He also said that the Poles have a very popular King and Queen. An Act of Parliament has made Jesus and Mary, King and Queen of Poland. Probably another reason why the economy is doing so well. I do not think their Royal Family cost a fraction of what our Royalty cost us or the President costs America.

Because different rivers meet at Wroclaw, then there are 128 river bridges in the city. To get to Church Island, Lucas the guide took us over the “Lovers Bridge”.

Each side of the foot bridge is covered in padlocks. Lovers proclaim their everlasting love by writing on the padlock and then it is locked onto the bridge and the key is thrown into the river. Looking at this bridge, the enterprising Pole with his stall selling padlocks nearby, should be quite wealthy by now.

A lot of the city was badly damaged during Second World War when Poland was trying to defend itself from the Russians, but the rebuilding has been done so well that it is hard to see what is old and what has been built to look old.  We went past a wall covered in bullet holes. 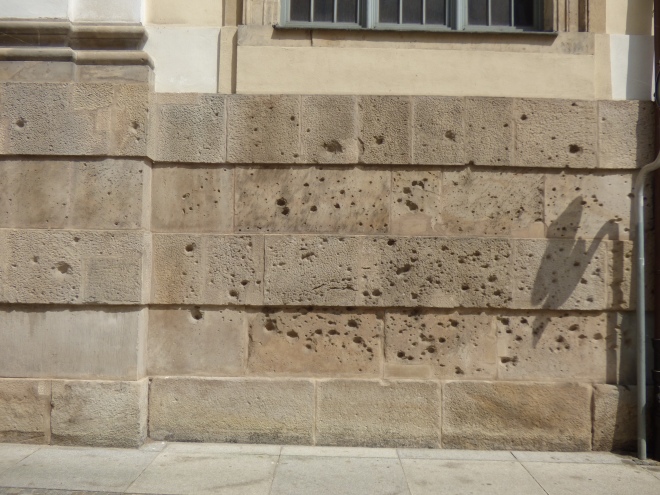 Lucas said it was one of the walls used by the Russians for executing captured Polish army officers. 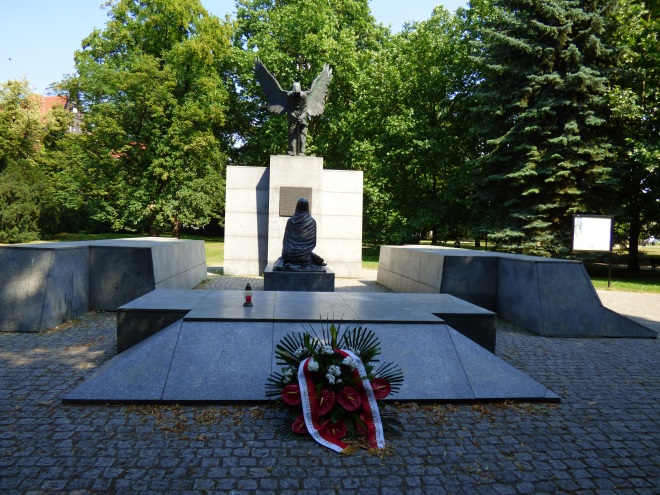 Further on we saw a memorial for the 22,000 Polish army officers, policemen and other prisoners, who in 1940, by the order of Stalin were all shot in the head. Nice man that Stalin

In the massive main square there is a beautiful building that looks as though it should be a church although it is in fact the town hall. On the side wall, I spotted these two delightful statues either side of each other.

He, obviously, has had too much to drink and his wife has her shoe off ready to punish his for his drunkenness.

This is a beautiful city and we thoroughly enjoyed our visit and I will let the pictures show just a few of the places and things we saw as we walked around. 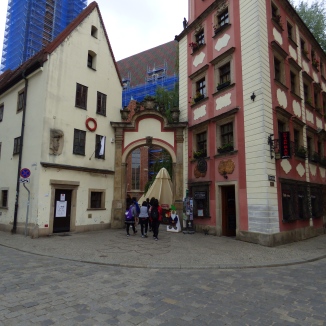 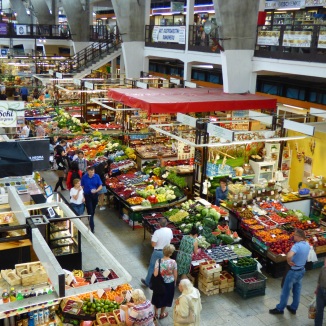 After a night of heavy rain, it never seemed possible, but today has turned into another gloriously sunny day. We drove northward to get to Poznan. There are two reasons for choosing this city. The first is that the DK Eyewitness Travel Guide tells us that there is a lot to see here and secondly it is due east from Berlin. We will do one more two-day stop in Poland, somewhere in the countryside and then we will have a bit of a break in Berlin.

We have parked in the grounds of Hotel Malta and it was a very short walk to get to an amazing lake. 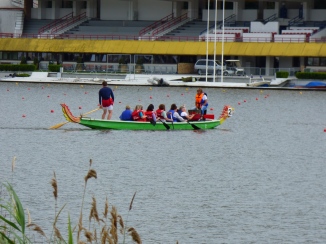 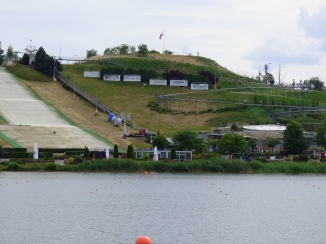 I presume this is a man-made because of the shape. It is long and narrow and is used for rowing races, canoe racing and dragon boat racing There is seating for spectators and the World Junior Rowing Championship will be held here in a few weeks’ time. On one side of the lake is an artificial ski slope with a luge track and on the other bank there is a very large thermal bath / swimming pool complex. By the time we had walked to the far end of the lake near the fountain, we were parallel to the cathedral and very close to the old town centre. We decided to walk back to relax in the afternoon and leave the visit until the next day.

We caught the tram to go to the city. Poznan is a city on the Warta River situated in western Poland and is known for its university and the old town, with its Renaissance- style buildings in the old market square.

It is Poland’s fifth largest city. Similar to our Christmas markets, there was a flourishing Summer Market going on all around the large square. 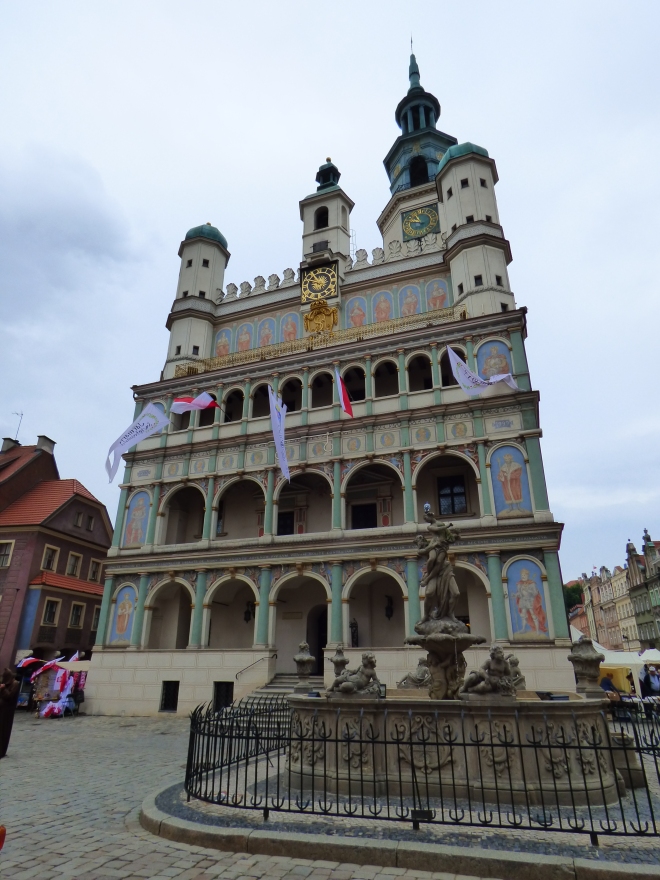 A lot of the buildings around the old centre are beautifully decorated especially the Poznan Town Hall House. As it is near the end of the school year there are lots of school parties everywhere. A lot of the younger boys, from the school groups, were all wearing plastic war helmets and carried shields and swords that they had bought at some of the stalls.

Unfortunately, there was not a walking tour today, so we did our best to find all the interesting things to see. We found the palace which is now a museum and went into a very ornate church where a service was going on.

For a change, we actually went to the main shopping area of the city and there saw this magnificent water feature which if you want to, you can walk through the middle of all the running water.

On the way to the cathedral island we had to cross a large road with two tram tracks running through the centre. We got a green light to cross the first section. We had to wait in the middle for a tram to cross. We got a green light and started to cross when Elaine caught her foot on the brickwork surrounding one of the rails. Down she went. One side of her face and her lip are badly cut and bruised as well as her knee which is painful for her to walk on. Always perfectly dressed, she was dirty all over from the dirt on the tram rails. A Polish lady and myself got Elaine to the other side of the road. We were very close to the cathedral so Elaine went down to the public conveniences to clean her wounds and to stop the bleeding. The resolute side of Elaine came to the fore. Despite looking like she had just done 14 rounds with a champion boxer she still insisted on visiting the cathedral and then walking back to the motor home.

As bad as it was, the good thing is that Elaine could easily have broken a bone or sustained a more serious injury. She had landed heavily on the left side of her face and body and her knee is swollen and she has pain in her arm. Already, she jokes that she doesn’t need collagen injections in her top lip. It is such a pity that our lasting memory of Poznan will be of the tramway crossing.

It is very opportune that our last few days in Poland will be spent in the small town of Lagow (population 1630) and not in another big city. It is a great opportunity for Elaine to rest up and get over the shock of her fall. We are parked in somebody’s back garden which they have turned into a small camper stop which is right in the centre of the town. Lagow is a two-hour drive from Berlin and is due east from the German city.

Poland is a country of lakes and forests. Forest covers almost one third of the country and there are around 10,000 Polish lakes in Poland. Most of the lakes are concentrated in two areas: Mazury, in the north-east corner of the country, close to the Lithuanian border; and in Lubuskie (the district), in the far west of Poland, close to the German border and this is where we are now. Lagow is in the centre of the Lubuskie Lake District which consists of several hundred lakes and the information leaflet says it is one of the major tourist attractions of the region. 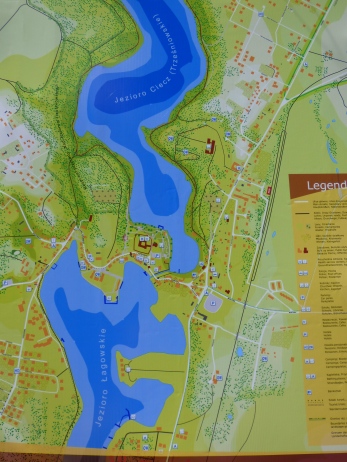 Tourists visit the lakes, not just for the wonderful scenery, but also for the water sports and to spend their holidays on clean sandy beaches by crystal clear water. Apparently, it is also a very popular destination in the winter for, when the lakes freeze, the smooth ice that is formed makes it perfect for ice skating.

Lagow is on an isthmus (a narrow strip of land which connects two larger land masses and separates two bodies of water). The two very deep lakes either side of the town are Trzesniowskie and Lagowskie.

The castle has now been turned into an hotel, and in the woods around the town, on top of a hill, lies the remains of the original settlement. We have already been on one walk and there are other paths we will explore.

This is so nice to be in this beautiful countryside. It is so different from all the city visiting we have done and it has given us another view of this wonderful country.

Tomorrow we will drive into Germany, en route to home. One thing worth noting. We very rarely see British vehicles and in the last four countries we have visited, we have seen less than ten British motorhomes and caravans and one of those was Brian and Wendys’, the Aussies. It is the first time we have visited this side of Europe and we will be back. All we have had is a taster of the countries since Greece, as time was getting on, and we do have a home to go back to and our family and friends to catch up with; we have been away a long time.

This is all about our year long meander around Europe in our motor home. It is a way of passing on what is happening, where we are and thoughts on what we have seen or done. Please comment as it is, firstly, nice to know this stuff is being read, and also tell me if there are other things you would like to hear about. View all posts by twoblueducks